I am a performer, comedian, writer and director/facilitator of creative projects.

I was born in Hertfordshire. Some people think I have a Northern twang. Northerners don’t think that. They think I might be Australian. You can judge for yourself below and view my most recent acting CV here.

The bug bit pretty early. I rushed home in great excitement when I was five to tell my parents I was going to be ‘townspeople’ in the school play.
I’ve done a wide range of acting work in a variety of venues, including Shakespeare in a shopping centre, comedy on a plane and storytelling in a toilet. For reviews of my solo show ‘Cheer Up, It Might Never Happen’ at The Nightingale, Brighton and The Camden People’s Theatre, London,click here. I also performed regularly with The Black Sheep, including Holy Days at the Soho and FairLy Tales at the Lyric Hammersmith and Edinburgh 2002.
As an improviser, I co-founded Fluxx which presented character-led long-form work, performing nationally and internationally. I created the children’s show The Quest!, which premiered at Warwick Arts Centre as part of Shifti and was programmed for The Hackney Empire Spice Festival (2006). It was then performed in Pennsylvania with an American cast. See ‘The Quest Improv’ page on Facebook.
Film work has included promos for UKTV Food (Living TV), directed by Brian West, the lead in Relent for Frank Films, Hooded for Silvertown films and a video for the band Embrace, directed by John Hillcoat.

Gwendolen ‘The Importance of Being Earnest’ 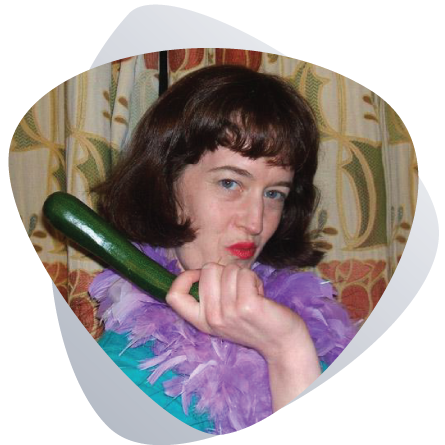 I have worked with several sketch groups and gigged on the circuit in London and Brighton. My two main comic personas are Mary Christmas and Margo Crabstick. I reached the Funny Women final in 2006, playing the Comedy Store as Margo; an alcoholic, lecherous Edinburgh Festival reviewer and the Funny Women showcases (Assembly Rooms/Underbelly) at Edinburgh, wearing a bullet-proof vest as protection from the venom of all the alcoholic, lecherous reviewers.

I set up and run Mothers Uncovered. It is a creative support network for mothers and the main project for my company Livestock.
I compiled and edited ‘The Secret Life of Mothers’ http://www.silverdart.co.uk/secret-life-of-mothers , created from interviews with mothers and writings about their experiences, with foreword by Caroline Lucas, MP.
Extracts from the book (available on cd!) formed ‘Your Stories’ which has been performed for health professionals and in theatres in Brighton.
I have written articles for several publications, including The Guardian and was co-editor of Brighton Mums
I’ve written or co-written many sketches and a lot of the material for my characters. I now create and direct shows for m/others uncorked in Brighton https://www.livestock.org.uk/mothersuncorked 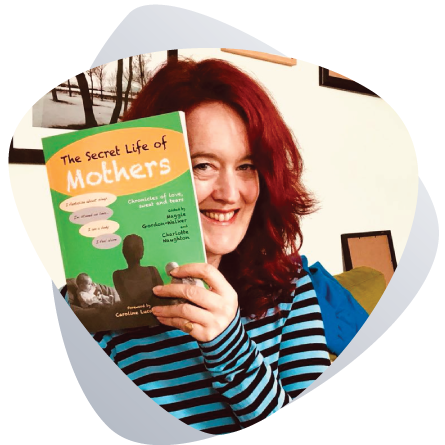