‘I want to go home. Properly.’

I visited my mum Caroline this week. She is in a care home in Worthing, with Lewy Body dementia. She’s been there two years. I was prompted to write this because my colleague and friend Charlotte Naughton just wrote an excellent piece about her aunt’s assisted death in Switzerland. I don’t have the reach of The Guardian, but I think it’s important to tell people’s histories, especially women’s stories. That is the guiding ethos of Mothers Uncovered, after all.

Lewy Body is not as well known as Alzheimer’s, even though many thousands of people develop it. It has elements of Parkinson’s, the dyskinesia and the shuffling walk. And hallucinations, some of which are quite lovely. Once she saw a stream in the woods and we’d go for a paddle later. I looked at where her gaze was directed: the small, but well tended garden at the Care Home and wished it were so. It was a much nicer hallucination than those she had had three years ago. 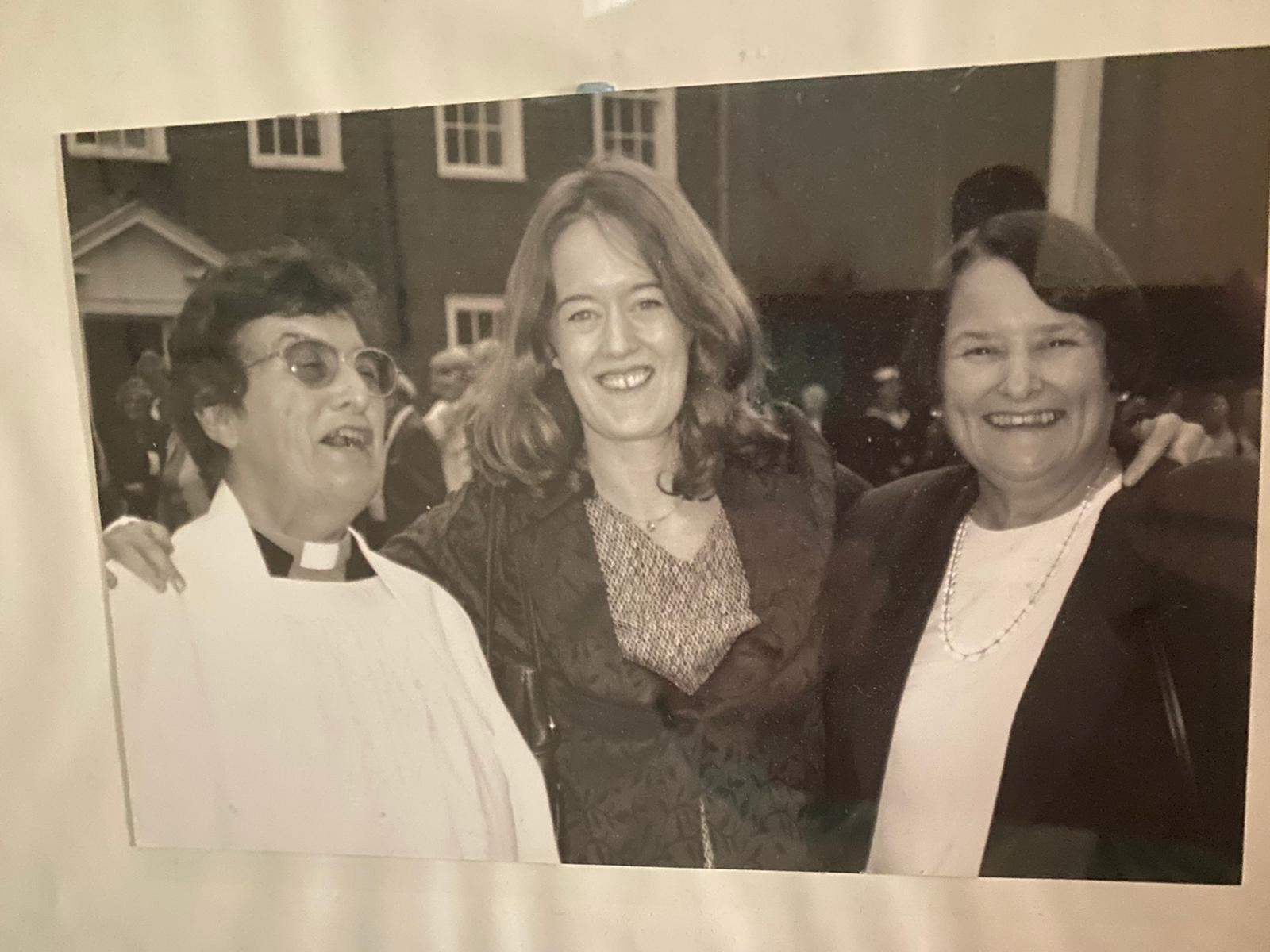 Caroline, myself and Ann at Caroline’s ordination at Canterbury Cathedral, 2003.

Caroline had come to live in the UK in January 2013, returned from 20 years in France, apart from the early 2000s, when she trained for the priesthood, (ordained by Rowan Williams, no less, and the reason for one of the quotes on my website home page). We had decided we would buy a place and create a living space for her, the ‘grannexe’ as she delightedly referred to it. The day I went to collect her from Stansted I had made a little sign: ‘Welcome Home Caroline’, which I held up as she came out of the international arrivals door, fancying myself in a Richard Curtis film, perhaps. She didn’t really seem to register it. I told myself she was just tired from the stress of the move and many preceding months of packing and bureaucracy (an especial mention here to my wonderful stepmother Jill Brierley, who visited every week to help her with this task). But I think her disconnection meant she was already beginning the slow decline. 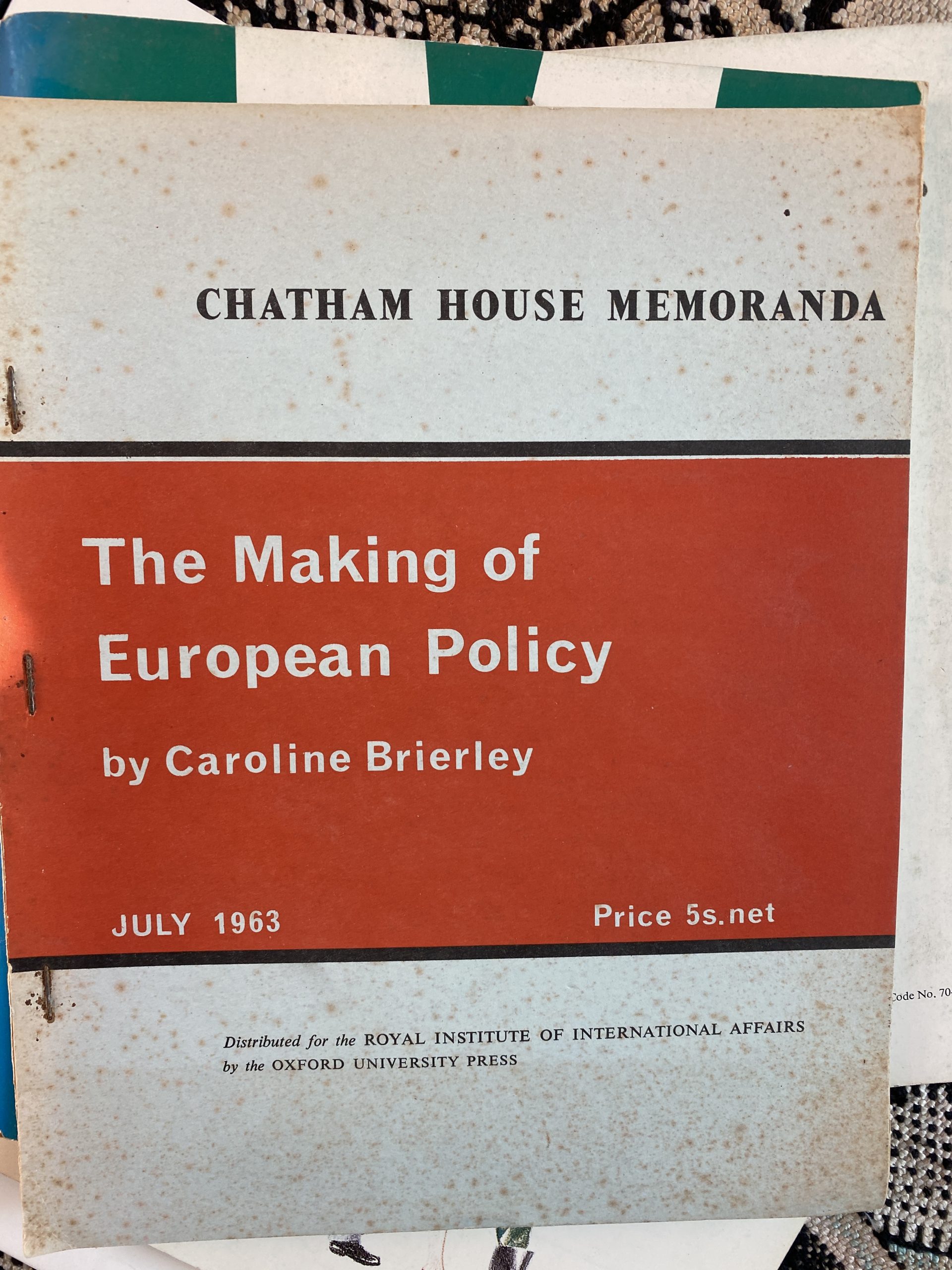 One of the many reports Caroline produced in her job at NEDO.

The year or so before she moved, she found decision-making very hard. This from a woman who reached the top of the civil service as an economist and frequently was the only woman at conferences. Later I discovered that losing your sense of smell can be a very early sign of Lewy Body and a memory came back from 2005 when she was babysitting and hadn’t noticed my baby’s very pungent nappy. At the time I just thought it was absent-mindedness, perhaps she’d always been unobservant I reckoned. But then I remembered her saying she used to be able to smell the dew on the roses on a summer morning….

Others didn’t think anything was untoward – she always rallied wonderfully at parties and other social occasions. My local community got to know her well when she picked up my boys from school or popped to the shops. She carried out services at a local church. (Not our nearest church, because we found, to our and everyone else’s surprise, that the allegedly liberal Brighton is largely opposed to women priests). She was a popular swimming companion to my boys as she never minded being dunked under water and containing a fair amount of ballast (!) would always bob up again. And there was always a chocolate biscuit to be had afterwards in the grannexe….

Her decline increased sharply in 2016, losing both her sister Judy to a stroke and her brother Robin to a heart attack. Robin’s was mercifully quick, awful for those left behind, but better for the individual. My uncle Norman had four depressing months with Judy dying slowly in hospital. By this time, I’d become increasingly concerned at Caroline’s inertia, her high blood pressure, her inability to concentrate on anything and her nocturnal wanderings. The following year when the boys and I were away she was found in her nightie in the street one day, having locked herself out. Luckily my dear neighbour Kathy was on hand to get her safely back in. Caroline implored her not to tell me, in case I would worry. When I found out by chance some months later, I was indeed worried.

The move to a Home at the end of 2018 was initially to an onsite self-contained flat ten minutes walk away. Seemingly ideal. We had gone to check out this Home some years before she moved back to the UK. ‘You must tell me when it’s time to go there,’ she had said then. By the time that stage is reached, people often don’t feel the same way. She often declared when she felt ‘better’ she’d do it, so I had to take charge as I knew there was no ‘better’ coming and it needed to happen. And I was finding her living with us increasingly stressful and debilitating (having lost my partner Chris to cancer the year before). It was clear she would need round the clock care fairly soon.

Sadly, the flat wasn’t the success we’d hoped. Her anxiety sky-rocketed. She would call me incessantly, day or night, worrying about menacing figures she saw standing by the bed, or perched on top of the cupboard. The staff mentioned that she was found, night after night, in the passageway outside her flat with a carrier bag of toiletries, believing she had to catch a train. I think she had regressed to her childhood in the war. And she wasn’t able to look after herself properly. Even when we arranged to have all her meals provided and a carer coming in daily, she would often fall over in the night en route to the loo and the emergency button would summon an external care provider, not someone in the Home itself, often with several hours wait. And as for remembering which pills to take when….

One of the falls meant she ended up in hospital and thereafter she lived in the Care section. Now she was being looked after, her anxiety immediately dissipated, but her mobility also decreased. Then the Home closed, with only six weeks notice. She was adamant she wanted another Christian Home, so the one in Worthing was the nearest that would take her, as she was becoming increasingly wheelchair bound. I hadn’t realised the distinction between nursing and care home, but now I do.

There was a moment in January last year, an unseasonably warm day, when we sat, muffled up in the winter sunshine. She looked at me clearly and said, ‘I’m sorry about all this, it wasn’t supposed to happen.’ The directness and clarity of her look was one I had not seen for many, many years. Of course, Covid then struck, meaning I could only communicate over the phone for some months. With her failing hearing and wandering attention, this didn’t really work. I have been able to see her since June 2020, the Home has been wonderful at enabling this, with gazebos in the garden and protective screens, now fortunately dropped to allow physical contact. 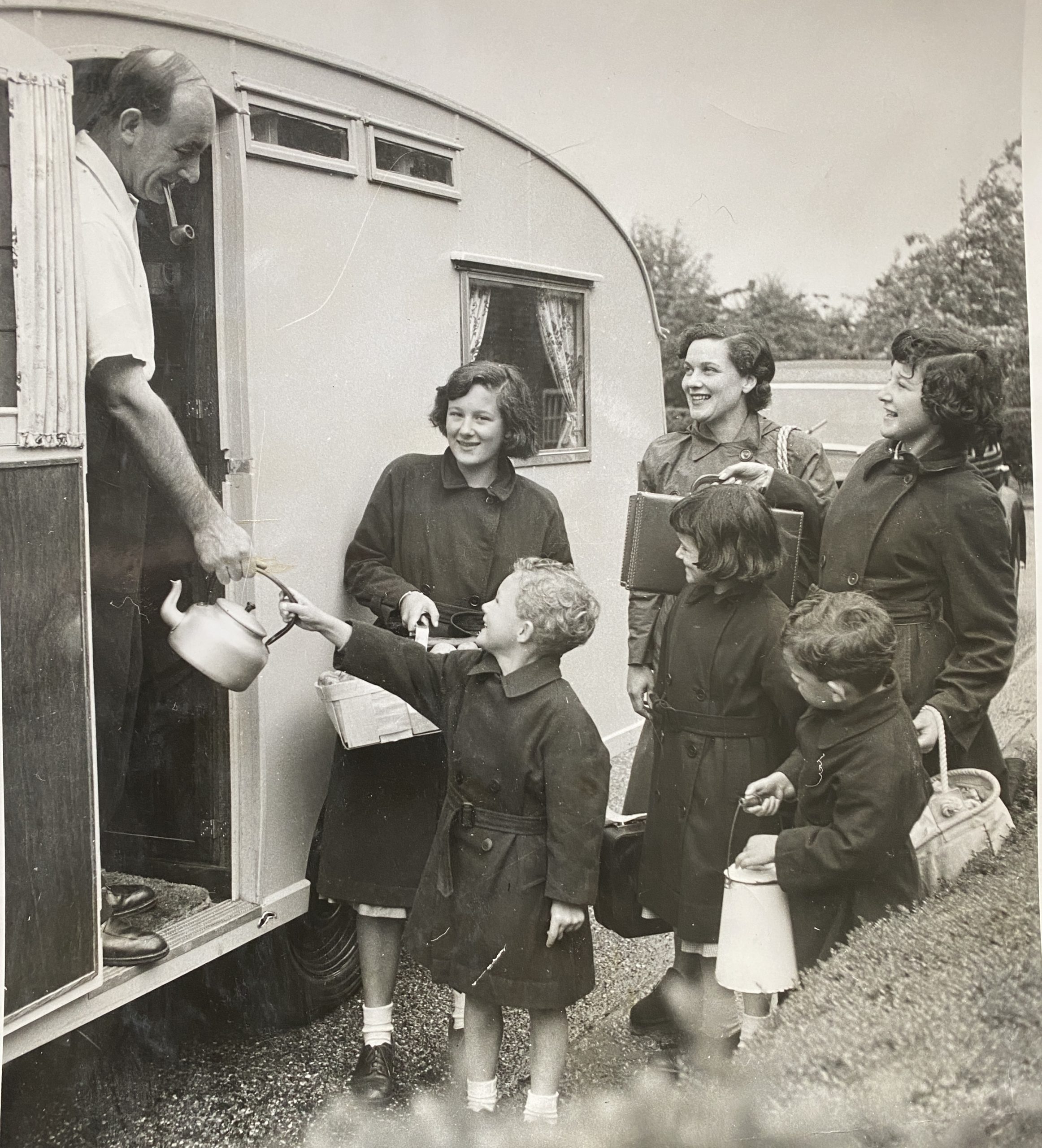 The Gordon-Walkers in the early 1950s. Caroline is on the right.

In my recent visits, she’s been more alert. But this last time, as she was wheeled to the visiting area, she looked to be asleep. I tried to chat for a while, but getting no response, decided to play her the recordings I’d sent to my cousin Jenny, when she was tending my beloved aunt Ann through her last days with cancer in January. My grandfather, who we all called Poppa, talking about his visit to Bergen-Belsen after it had been liberated. And for good measure, the one Jenny played Ann, as the BBC one didn’t work in the States. When they finished, I mentioned that I thought they had helped call Ann ‘home’ to their father.

I put a hand on her arm, once strong and fleshy, now shrunken and shaky, my eyes filling with tears. ‘I want that too.’

I had earlier this year told her that she must go when she felt ready and said it again then. I imagine that many parents try and hold on for their children.

‘That you’re still here?’ I queried.

I can understand why there is a fear about the notion that assisted death is state sanctioned killing. But the Swiss seem to manage it, and a handful of other countries. In the UK, the topic gets continually kicked into the long grass by a succession of leaders, who maybe arrogantly assume the laws of nature don’t apply to them. 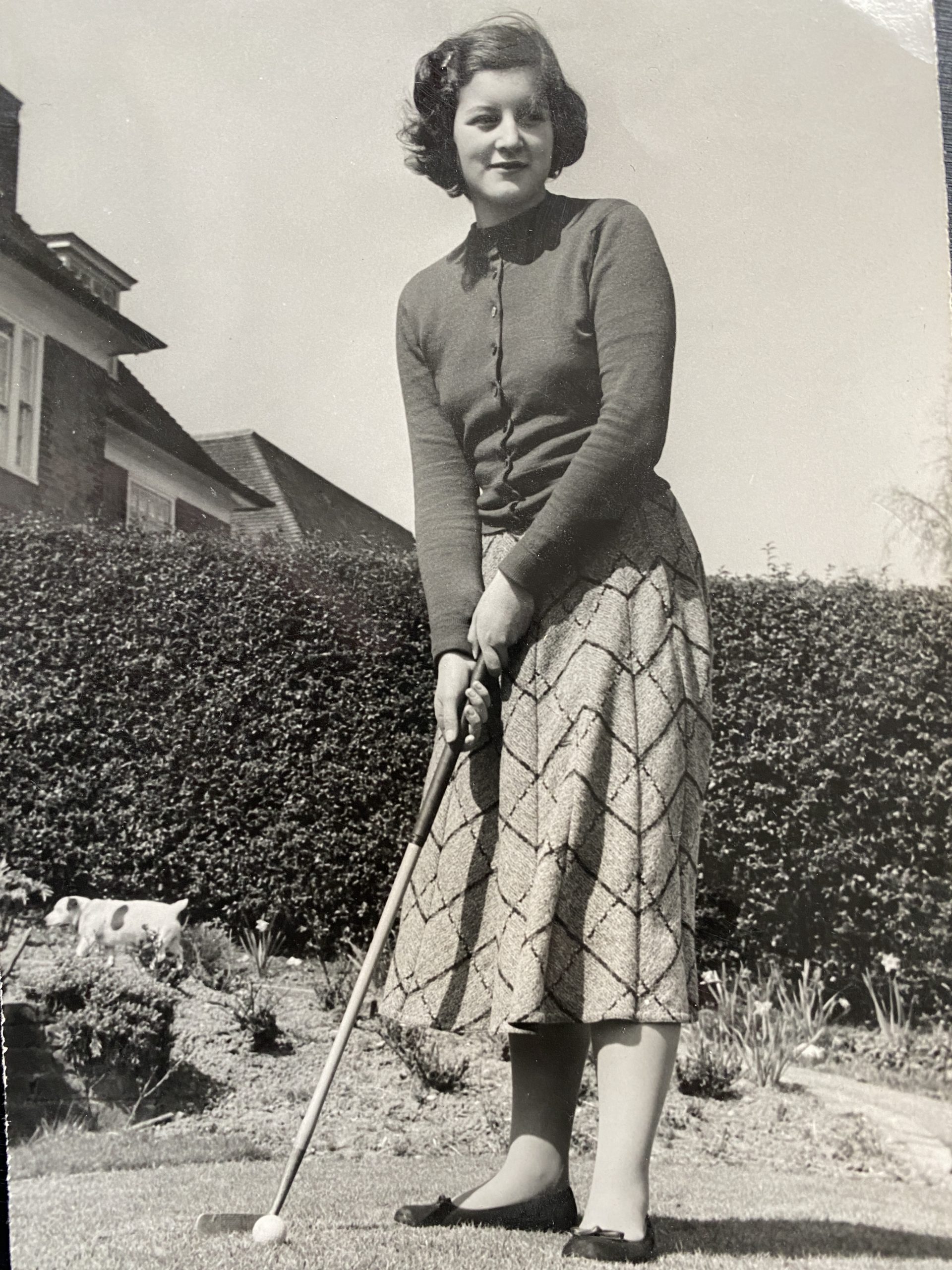 Caroline in the mid 1950s, probably at South Square, London, her home. Although she spent between the ages of 2 and 7 evacuated in Jamaica and much of her teens away at boarding school.

I looked at my mother, eyes still closed, her only option being to stop eating. A slow and painful way to depart, rather than a dignified exit of her own choosing. If she could take the drug that Ann Bruce had done, she would in a heartbeat. Then we could celebrate the wonderful woman that she was and she could go running home to a place of no pain.

A happier collaboration between myself and Charlotte, ‘The Secret Life of Mothers’…