My wonderful, indomitable aunt has just died of cancer. It’s Holocaust Memorial Day (Jan 27th) – I’d found a BBC clip of Patrick, her father, who the whole family called Poppa, speaking about entering the Belsen concentration camp after it was liberated and sent it to my cousin Jenny, who has been with her these last weeks. In fact Jenny couldn’t play it, being outside the UK. I found another to send her. Somehow, it felt very important to me that Ann could hear it.

She wrote: ‘I played that recording for her this morning….just before she passed away.’

When I sent the clip I wondered if that might be the thing that would end the half waking state that she has been in the last three weeks. They say hearing is the last sense to go. Perhaps she had a sense that he was calling her home.

Ann was a scientist. She liked hard facts. She was also a big fan of Jane Austen, drinking, walks, tennis, racing demon (at which she was particularly brutal, with no suggestion of pandering to younger and/or more sensitive family members) and pork pies, which were unknown in the States. Whenever she made one of her many visits to see the family in the UK, she’d be showered with them.

She moved with her husband Andy to the States in the mid 70s, first to Connecticut, then settling in Madison, Wisconsin, with Jenny and their second daughter, Kate. She worked in the university there, moving from the lab to an office in later years. Her marriage ended in the early 80s and she had liaisons subsequently (some of which I know about!), but never remarried or lived with anyone again.

What I remember best is the various holidays. When young, we went twice to Trout Lake in North Wisconsin, building us a little den on an island and camped in the Smoky Mountains. Lots of mosquitos in both locations. When I was 15, I spent a month with her and my cousins while my parents were in Thailand. I’d kind of hoped I’d meet an all-American boy for the summer, as the girls did in the teen romances I was reading. That didn’t happen, there was a lot of ‘Annie’ roleplay with my younger cousins, entranced by the film, while she was at work. We did go to Trout Lake again and to Great America theme park. ‘Wake up!’ she shouted while we were on the long drive there, with my cousins slumbering in the back. ‘I need someone to talk to so I don’t go off the road.’ 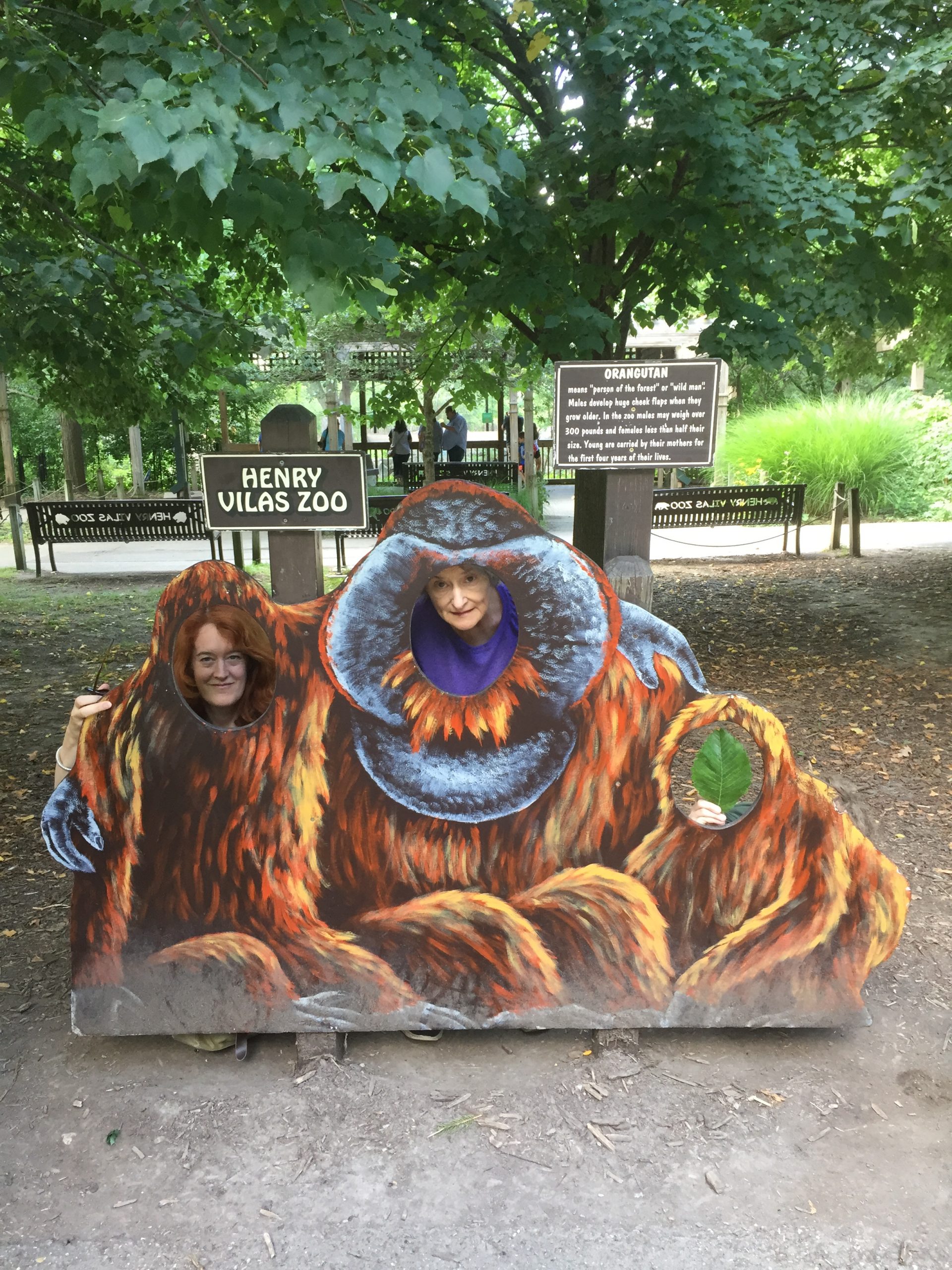 She came to Greece with the girls and our family, one night spraining her ankle on the dimly lit path (too much retsina, I’d say). Then, when I was about 17, she joined me and my parents on a holiday in Tunisia. I was delighted to share a room with her – being an only child was often lonely, and she did feel big-sisterish, I certainly felt I could talk to her more as an equal. She was always interested in life, in learning what others were up to. One night, I tiptoed in gingerly quite late, having finally managed to snare the waiter I liked for a kiss, only to find she wasn’t there. She came in later still, back from her own ‘romantic walk’ with a fellow guest. We giggled at our naughtiness and agreed not to tell my parents. At the time, with all the arrogance of teenagerdom, I felt faintly surprised you’d still do that kind of thing at ‘her age’. She was only in her early 40s at the time.

The best most recent memories I have are from 2017, first when my boys and I visited on our tour of the States in the summer (where the pictures are from), then when she joined us for a week on Gran Canaria in the autumn with my mother. The second was more fun, I think she felt the pressure of hosting, having lived on her own for a long time, especially with my boys’ impending teen tendency to loll about and not leap up enthusiastically for walks. They did learn Racing Demon though.

Gran Canaria was an absolute hoot. The boys saw here was someone who could outdrink and outswear their mother – always good! The defining moment was when the five of us tried to take a bus to a nearby beach, but were confusedly standing on the wrong side of the road. A local gave us directions, then the four of them moved off, while I thanked him. ‘Is that four generations?’ he asked. I said no, the two of them were sisters, with six years between them (although my mother’s burgeoning, but as yet undiagnosed dementia, was aging her quickly). I told Ann this privately later and she punched the air in impish delight. We didn’t tell the others. As I pointed out, it favoured her (and me probably), but not them!

She’d had cancer twice before, breast in the late 80s, which was successfully treated. I remember one lunch party, when her wig nearly slipped in front of my grandmother and had to be hastily restored as their mother didn’t know about it – they all avoided telling her about illness or misfortune, as she would work herself into a frenzy of worry. (As it was, she talked incessantly about one of her son’s piles as if it were a death sentence). Then skin cancer, then finally this, oesophagus, that spread to the lungs.

She hung on in there though. Jenny and I speculated that it was Biden’s inauguration she was waiting for, just to make sure the orange monstrosity was finally gone. The last conversation I had, via Whatsapp, she managed to mumble ‘I’m not very well’, in true understated fashion.

I used to call her B.S. Ann – (not bullshit, although she was a great caller of that!), as in baby sister, because she was my mum’s younger sister. My mum called her Annda. 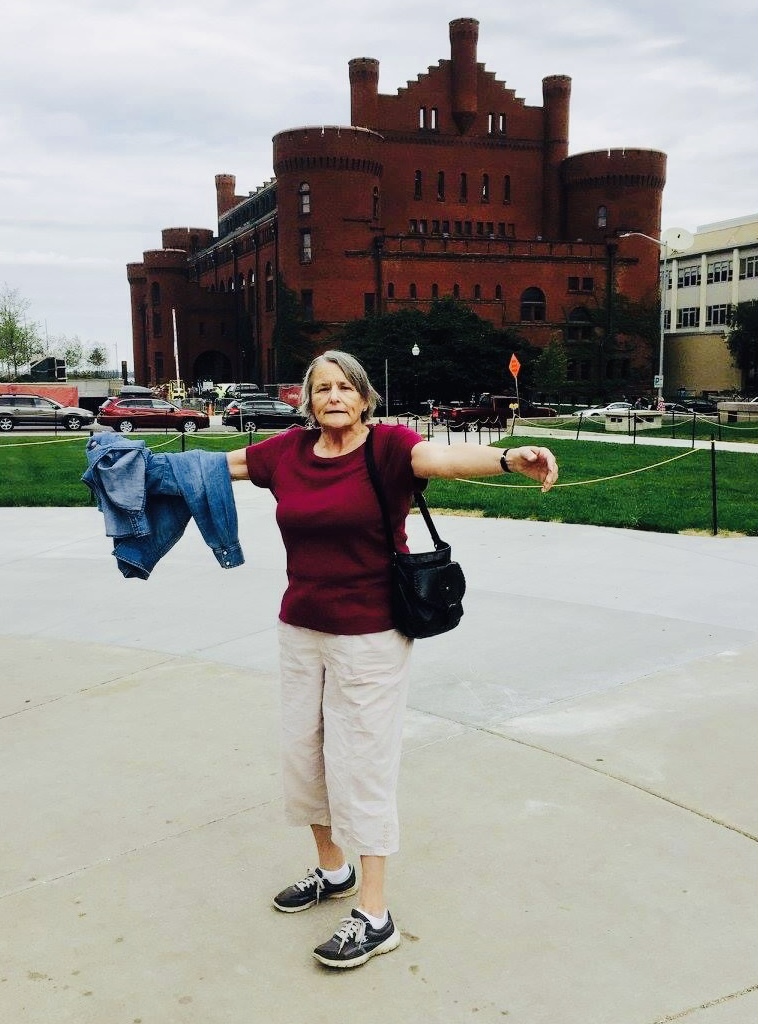