It’s been a busy half term. The usual flurry of admin surrounding the Mothers Uncovered courses; including a new one called The Teen Years, for those navigating the later years of their offspring. The continual quest to make our work more sustainable, involving attending meetings and conferences. Livestock’s separate project SoulFood, currently going down a storm in food banks, and our forthcoming M/others Uncorked immersive show about school curriculums. And of course our book launch of The Secret Life of Mothers.

I am so proud of our book – and of course, major props to Silverdart, our publisher, for their hand in making it the lovely thing that it is. To my knowledge, there’s not another book exactly like it. There’s been lots of books about mothers, mostly written by mothers, but generally it’s the overview of one person, citing examples of others. This is truly the work of those 50+ mothers whose stories appear in it. All proceeds from the book go back to our charity to run more peer support activities at low cost, should you be wondering whether to purchase. (Please do! Also available on Amazon!)

We were fortunate to have Caroline Lucas both write a foreword for the book and attend the launch. Seeing as she is so much in demand, I could tell people were surprised that she had found the time. It probably helped that she has been a supporter of Mothers Uncovered for some time. We had first met at the start of 2010, completely by chance. I was attending a focus group set up by a friend’s husband. Can’t remember exactly what it was about 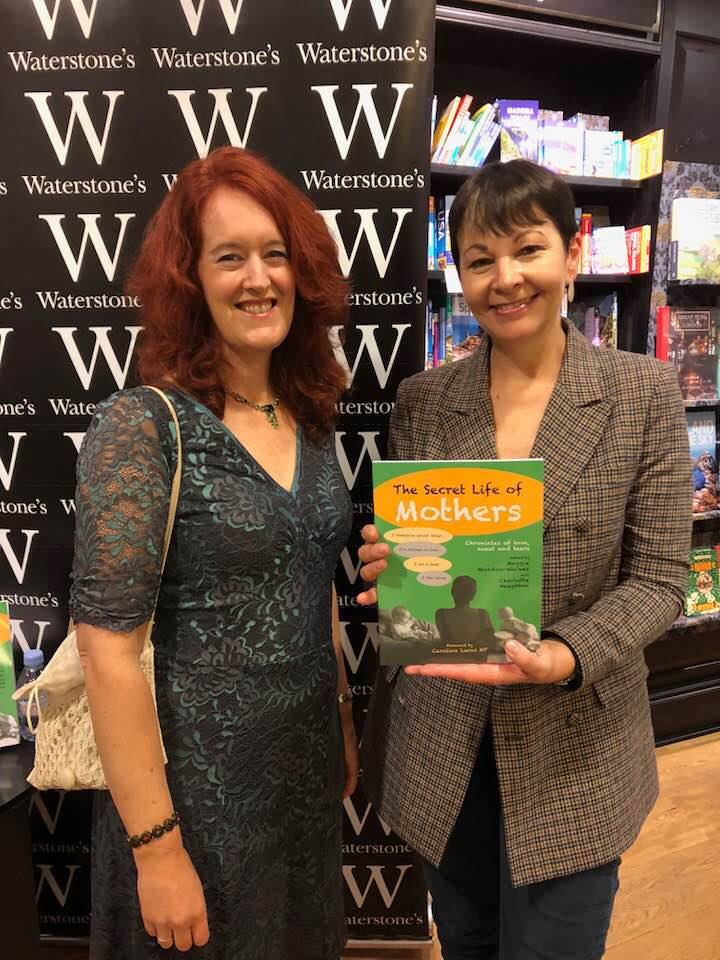 now, I was going because it paid £40 (!). I think it was to do with local services and how they could be improved. Caroline, then an MEP and still with time to answer her own correspondence, came along to hear the opinions. I subsequently invited her to a performance of the work from our ‘Your Stories’ course at The Tarner Children’s Centre. Many of those writings appear in the book. Since then, she has been a staunch supporter: attending a couple more of our events and occasional meetings about various projects. The book idea came up in 2011 and she’d agreed to write the foreword then, but the idea had to be shelved due to lack of funding. This year, partly as a result of some personal reasons, I thought stuff it, we’re doing it anyway, even without funding. Luckily, she’s a woman of her word ?.

Of course, in order to garner maximum interest in our event, I had promised Waterstones and all our social media channels that she would be present at the launch. Until the moment she walked in the door though, I wasn’t entirely convinced she’d make it. Not because of any lack of willing on her part, but because her timetable is so fiendishly busy I’m surprised she finds time to sleep. When speaking to her office about options two months earlier, the date we chose was the only one out of about six that she was available and even then there was no guarantee: a major parliamentary incident might arise. I happened to bump into Caroline a few weeks earlier in North Street and said that her presence would be excellent, but of course, if there was a last minute vote to overturn Brexit for example, we’d take one for the team, which made her laugh. God knows there’s not much else to laugh at in the whole debacle. More a Munch-style scream at the unfolding horrors.

By the time she had completed her earlier commitment in conversation with Helena Kennedy QC and reached us, the night was quite well advanced. I was a little giddy by this point and can’t remember exactly what was said. Other than she thinks Mothers Uncovered is a unique, amazing service and should be protected. And that she’d like a group to deal with the empty nest syndrome. (I’m sure one will come when I’ve reached that stage). There is a clip here detailing some of her speech from the Q & A https://vimeo.com/300061521. The full version was less guarded, but that’s her story. Eloquent, engaged and with more integrity than certain others with far more power in Westminster. If only that could be bottled. Eau de Lucas.

We were both interviewed by the somewhat idiosyncratic Latest TV (link below). I make an inappropriate quip about people‘s extended coffee breaks; I actually meant that the work culture isn’t particularly conducive to enabling those with limited time to partake, being riddled with bureaucracy, long hours and endless meetings. But if there’s ever a chance to put my foot in it, I do, rest assured. Thank God I’m not an MP. (Although my grandfather, who was an MP, had a similar tendency and it didn’t do him any harm. He did fall foul of the racists in the 1964 election, but that’s a different story).https://www.youtube.com/watch?v=-6J8oKPU2Ko